Two flare stacks in one facility? Make sure to consider radiation from one stack to the other stack surface

It is quite common for a facility to have multiple flare stacks with different heights. Consider a sour gas processing facility where there are two stacks, a taller stack for handling the acid gas, and a shorter stack for handling the emergency scenarios. The question engineers are often asked is how far the distances between the stacks should be.

When determining the required distance between multiple flares, engineers typically only consider the additive radiation intensity on the ground level. However, if the stacks have different heights, one should consider doing a heat balance to evaluate the maximum temperature resulting on a stack surface given the radiation from the other stack.

The following table shows the API guideline for the acceptable levels of radiation intensity.

The main concern for these guidelines is the safety of personnel with regard to the radiation intensity they are exposed to. For equipment being exposed to radiation, API 521 indicates that equipment is capable of handling higher levels of radiation intensity than the guideline above. If evaluation is necessary, a heat balance could be performed to estimate the resulting surface temperature for comparison with the acceptable temperatures for the equipment.

Based on the literature, the following approach could be used for estimating the maximum surface temperature of the stack:

where Qabs is the heat absorbed by the equipment, Es is surface emissivity, θ is the surface angle from the normal radiant 'beam'; Fv is the view factor or fraction of equipment area exposed, and I is the incident radiant heat calculated from API 521. For maximum temperature, we would use the following assumptions:

In equilibrium, the heat absorbed by equipment (Qabs) would be equal to the heat taken away from the surface by natural (Qnc) or forced convection (Qfc) and radiation (Qradiation). The following set of equations quantifies the heat balance on the surface: 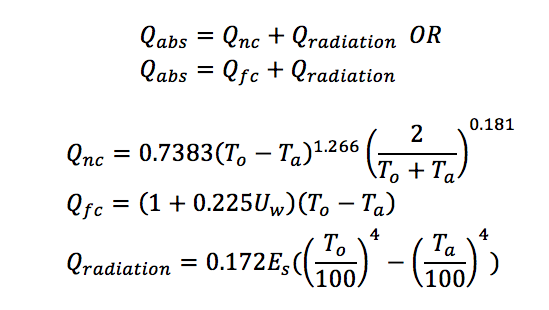 where T is the temperature of the surface at time t. k is the time constant and is calculated as follows:

ρmetal is the material mass per unit surface area (lb/ft2) and cpmetal is the heat capacity of metal (Btu/(lb.R)).