Relief Calculations: What to expect

Data about actual relief scenarios are lacking, especially as it relates to the relief loads resulting from a specific relief event. This has a few reasons:

As such, reality would not match the relief scenario as defined in a calculation.

This brings us to a very important question:

What should we expect from our relief calculations?

There are two main classes of relief calculation methodologies that are recognized by API and are considered common industry practices:

Let us start with the dynamic simulation case as it is easier to comprehend. In this case, a dynamic model, running in steady operation, is validated against the actual plant performance. This gives us confidence that the model in terms of thermodynamics and operations behavior is accurate enough. The inclusion of the equipment holdups and the ability of the simulation to model changes over time is assumed to be accurate mainly because of the established ability of the simulation software itself rather than as measured against the plant (since relief scenarios are not adequately measured in real operations). This however is a safe assumption, after the thermodynamics and equipment validation, since dynamic models have consistently been utilized for conducting control and operability studies for a couple of decades now with great success. Applications like compressor surge control and advanced control rely heavily on dynamic simulation for design development and verifications with consistent success and they have become a common practice.

The accurate representation of the control system specifics is of less importance in relief calculations than it is for control studies since the rules for relief calculations do not take credit for controller action unless it makes the relief load worse (i.e., higher). This is for good reasons too, since there is no guarantee at any given point in time that the control system is functional, or that the tuning parameters and setup are consistent with design. As such, ignoring controller performance for relief scenarios is the best practice.

With that, we end up with a dynamic model that is the best representation of reality we can get to with current knowledge and technology. The model is best at representing the relief scenario as defined (with the control action limits indicated above), as well as running case studies to confirm that the defined control system limits are in fact the most conservative. The case studies are an integral part of a rigorous dynamic model, as they provide quantitative evaluations of alternatives.

So, if one wanted to set concrete expectations for dynamic simulation calculations based on the above, it could be that:

The figure below shows how the time-stacking of relief loads from different sources allows us to estimate the loads for flare headers, knockout drums, and flare stacks. 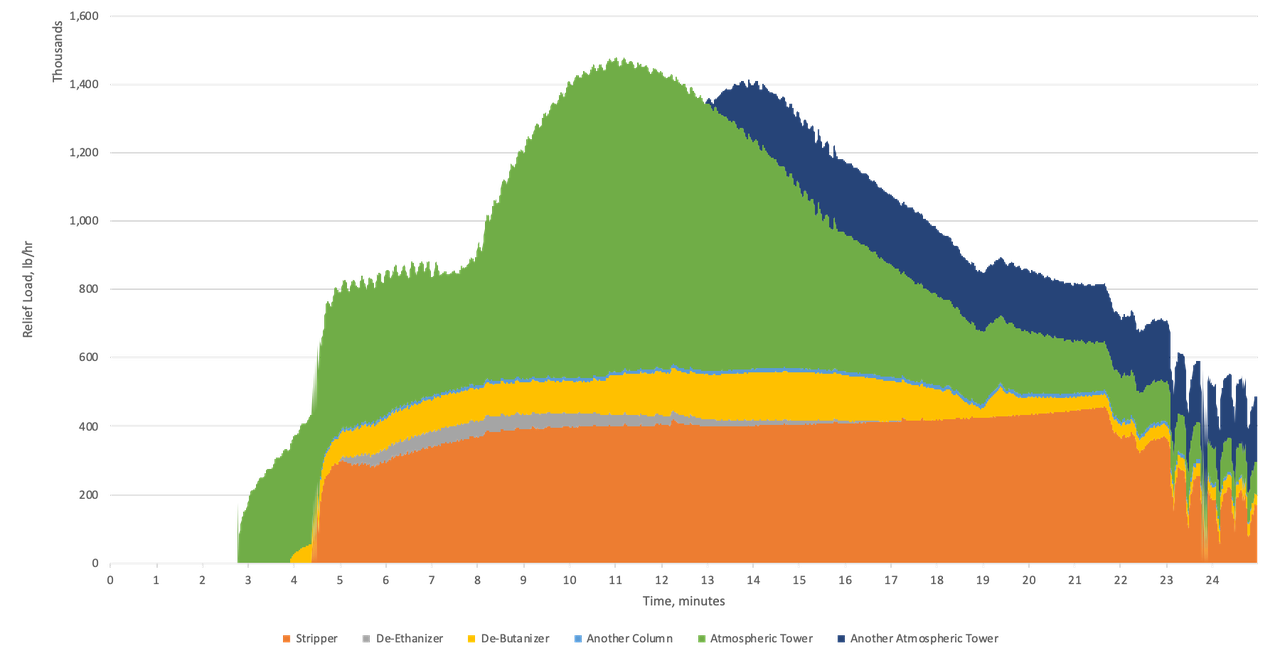 Learn why you should use dynamic simulation.

The main challenge of steady-state based calculations is their inability to deal with transient behavior, like changes over time. As such, we rely instead on assumptions about the magnitude of each relevant parameter, then assume that this magnitude will be maintained throughout the scenario, then use that to calculate our relief load. We also assume that the system volume and holdups play a negligible role in the “peak” relief load calculated.

For example, the calculations rely on some “unbalanced heat load” that gets applied to a liquid volume, generating an excess of vapor that defines the relief. As such, the latent heat of that body of liquid is a key parameter since the same heating duty results in very different relief loads when applied to different latent heats. At the same time, we intuitively know that the composition during a relief scenario will change over time, and hence the latent heat will change with it. This leaves us with only one alternative, which is to find the smallest latent heat value (this results in the largest relief load as the latent heat is in the denominator of the equation) and use that for the calculation.

If other parameters that affect relief are present in the same case, we also need to estimate their most conservative values (the ones that produce the largest relief) before we combine all of them into the final relief/flare load.

The results we get from this approach are by definition not accurate. We already intuitively know that. What steady-state based calculations provide is simplicity, combined with conservatism. In other words, we don’t expect the values produced to be actual, we expect them to be larger than actual because we know we used very conservative assumptions. At the same time, we cannot reduce these assumptions in the name of accuracy, because there is no implied accuracy in the calculation methodology without accounting for time dependence, which again takes us back to dynamic simulation.

So, if one wanted to set concrete expectations for steady-state based calculations based on the above, it could be that:

Do steady-state based calculations live up to these expectations?

Recently the assumptions driving steady-state based calculations have been getting more and more stringent. This trend has been fueled by multiple relief occurrences and failures that bring into question the validity of some of the simplifying assumptions used in these calculations. The response to such events has been to push the design engineers performing these calculations to push for more conservative assumptions. This trend resulted in a counter push by the industry to question the validity of such conservatism and whether it is getting into double jeopardy accounting.

To visualize this trend, we compiled the following graph that shows how multiple steady-state calculations for the same system changed over time.

The red dots represent the smallest relief load calculated for the system, while the yellow dots represent the largest (both using steady-state based methods).  The data points are referenced to dynamic simulation results (assuming that dynamic simulation results are the closest we can get to realistic relief loads as possible with current know-how). Note that the y-axis scale is logarithmic.

The sample size is small, as data for the multiple calculations for the same system is scarce. However, it still shows a trend that we have witnessed in the industry in the past number of years. Note that all red dots coincided with the original design of the system, or shortly after, while the yellow dots represent the most recent calculations. Also, note that these yellow dots were in essence the trigger for the need for dynamic simulation to provide a more rigorous relief load estimate that could be trusted by both design engineers and owners.

In general, these failures have been most pronounced in distillation column applications, where the system is complex and the behaviour over time is highly variable. Much simpler applications like fire and blocked discharge cases seem to have less disparity between dynamics and steady-state methods.

Relief load calculations are to be approached with careful consideration, and the expectations from the selected method are to be evaluated and communicated adequately before such work is undertaken. Both client and design teams have to understand the limitations of the chosen methods and agree on the applicability of the method to the task.

As a general rule, distillation column relief calculations should only be approached using dynamic simulation. The number of cases where other types of calculations have severely underestimated or overestimated the relief load are very consistent. Simpler scenarios like fire cases and blocked outlets might be acceptable with steady-state based calculations.

The key sign that it is not acceptable to use steady-state based calculations is when two engineers disagree over the simplifying assumptions of the method. As soon as that disagreement arises, the switch to using dynamics should be made before much time and effort are wasted in arguments and justifications that are impossible to prove or disprove without quantitative transient analysis.

Steady-state methods have for decades provided a solid yet simple approach to quantify a highly transient process. However, it is time to be aware of the limitations of such blunt tools.

Process Ecology can assist with modeling and calculations for upstream oil and gas scenarios, contact us if you'd like to learn more. 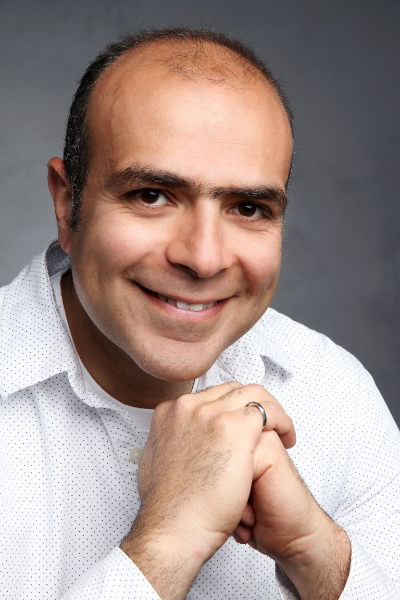 Mo is an innovator, entrepreneur, and problem solver, with a background in chemical engineering and business. With over 25 years of experience in the oil and gas industry, Mo is well versed in finding technical and business solutions to a large spectrum of problems. Mo’s business acumen, leadership, critical thinking and communication skills have helped bring about changes in multiple organizations and imparted a lasting impact on how business is conducted.Mo’s career took him through engineering software (Hyprotech/Aspentech, 1998 to 2004, dynamic simulation specialist), process engineering (Fluor Canada, 2004 to 2011, dynamics subject matter expert), extensive downstream experience, and extensive upstream and SAGD experience (MEG Energy, 2011 to 2017). Throughout his career Mo served clients in North America, Europe, Middle East, Asia and Australia in the areas of gas plants, refineries, SAGD plants, pipelines and solar energy among many others.Mo holds B.Sc in Chemical Engineering from Cairo University, Egypt and an MBA from Ivey Business School, Western University, ON, Canada.