Climate change is one of the great challenges of our time and directly affects the health and quality of life, environment, and economy in a society. Climate policy is a global issue and nations around the globe are taking actions to reduce greenhouse gas (GHG) emissions. In response to global policy change and contribute to global emission reductions, Alberta’s Climate Change Advisory Panel recommends the development of a comprehensive climate change strategy with the main objectives of reducing Alberta’s GHG emissions, mainly via reductions in the use of coal and oil, and increasing use of natural gas and renewable energy.

The main thread of the proposed strategy is carbon pricing. The panel believes that “carbon pricing is the most flexible and least-cost way to reduce emissions” [1]. The new policy is intended to urge consumers and companies to use lower-carbon, cleaner, and renewable energy resources instead of high-priced and high-emissions energy. The implementation of the policy will speed up the reduction trend in carbon emissions in the short term and in the longer term, it will create an environment encouraging innovative ideas and new technologies and make an opportunity for lower-carbon products to compete in the energy market [1].

The existing SEGR covers large industrial emitters in Alberta. SGER is a combined carbon pricing system including elements similar to carbon tax and cap and trade policies (Figure 1). Facilities emitting 100,000 tonnes CO2E/yr or more from all sources are required to reduce their emissions per unit of production by 15% below their historical baseline emissions intensity in 2016 and to 20% in 2017.

If a facility reduces its emissions intensity below its emissions target, it may generate “Emissions Performance Credits” (EPCs) [2] which can be banked and accumulated for future years or be traded in the carbon market. On the other hand, facilities with annual emissions intensity over the limit which are not able to improve their performance to meet their targets must acquire credits. They may either use their banked EPCs from previous years, or purchase EPCs from a different facility, or “Emissions Offset Credits”, or pay their carbon tax to the Climate Change and Emissions Management Fund [2]. 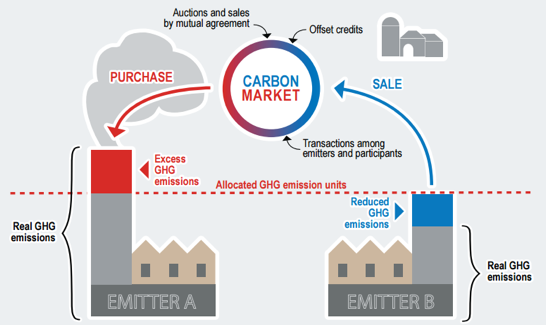 As per existing policy (SGER), only large emitters which are responsible for about 45% of emissions in Alberta are under the carbon pricing system. Under the new policy the remaining uncovered sector of emissions will be categorized as end-use emissions. In addition, the advisory panel believes that the SGER “emissions targets are among the most expensive potential emissions reductions in Alberta’s economy“, and it does not drive innovation to design and create new technologies with lower-carbon emissions. Referring to economist’s suggestions, the panel considers the carbon pricing system as the most cost-effective approach for emissions reductions [1].

The proposed carbon pricing approach in Alberta (AB) will cover emissions from up to 90% of the sources, including large emitters and end-use emissions which are responsible for 55% of emissions and are not under the current policy. Under the new policy, similar facilities will be treated identically. However, the carbon pricing system will be modified such that trade-exposed industries (pulp and paper, cement, iron and steel, etc.) are protected from its employment and competitiveness impacts. It is also intended to support vulnerable communities and lessen the effects of carbon pricing on low- to middle-income families and small- or medium-sized businesses, where applicable, and will “fund complementary emissions-abatement programs”. In terms of the strictness of the emissions policy, the new policy will follow Alberta’s other competing and peer jurisdictions [1].

Under the new policy (CCR), carbon is priced depending upon the type of emissions, either emissions from large industrial facilities or end-use emissions.

Large industrial facilities contribute approximately 45% of emissions in Alberta. For large emitters, the panel recommended the replacement of the existing policy (SGER) with the new carbon pricing policy in 2018.  Under the CCR, for facilities with emissions over 100,000 tonnes/year, all emissions will be taken into account for carbon pricing, but emissions permits would be allocated based on the facility output and added-value.  For example, facilities with cogeneration will be rewarded if total emissions associated with the combined output and electricity production are reduced.

The remaining 55% of emissions in the province are covered by the new policy under the end-use emissions sector. It includes emissions from transportation and fuel combustion and fuel distributors are required to obtain emissions permits through the same procedure used for acquiring credits under SGER.  A similar policy is already in place in Quebec [1].

The Panel suggested that the carbon tax be based on $30/tonne of CO2E by 2018 for facilities which are going to acquire emissions permits by paying to the government. The new carbon taxation is evaluated to generate revenue of around $3 billion by 2018, and potentially increasing to over $5 billion by 2030 [1]. The panel recommended spending the revenue to mitigate the impacts of new policies on low and middle income families and protect the small- and medium-sized businesses from unanticipated consequences, to invest in the complementary policies in order to reduce carbon emissions intensity, to support workers and vulnerable communities that their needs adversely affected by the new policy, to include Aboriginal participation in climate change, and to provide financial resources for other government priorities [1].

When should these recommendations be enacted?

As recommended by the panel, the new policy for carbon pricing should be effective in 2018 after expiry of the SGER. A regulatory framework for methane management will be phased in by mid-2016 and a non-regulatory initiative including verification, reporting and government structure, offset protocols and establishment of a technical implementation team and baseline information should be ready to implement by the end of 2016. 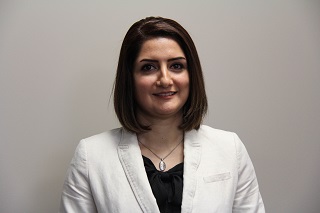 Samaneh is a Process/R&D Engineer, with over 5 years’ experience in process engineering. She joined Process Ecology in 2014 after she obtained her Ph.D. in Chemical Engineering from the University of Calgary. She currently provides process engineering services and software development support. Samaneh is an Alberta Innovates Industry Associate since July 2015 doing research in the area of sensitivity and uncertainty analysis in SAGD simulations. She received her BSc and MSc degrees with distinction from the University of Tehran, Iran, and gained valuable process engineering experience during 3 years of working with Gastech International. Samaneh brings significant knowledge in engineering, thermodynamics, and uncertainty analysis that complements Process Ecology's strengths. In her spare time, she enjoys cooking new recipes and watching nature documentaries.