In a constantly changing market maximizing the flexibility of daily operations can provide the edge over the competition. Daily operational constrains require rapid decision making to minimize downtime and to incur in unnecessary costs. The estimation of heat losses in pipelines is one component that can debottleneck operations if well managed or penalize them with additional costs. A rapid and highly accurate estimation method can translate into optimal engineering decisions taken timely.

In heavy oil facilities, most empirical approaches fail to represent heat transfer phenomena with enough precision because the physical properties of these fluids experience large and rapid changes even with modest changes in temperature and pressure (for example density and viscosity). In this communication, we apply a first principles-based model to determine the heat losses in a heavy oil pipe that has been subjected to a disruption in the operation (fluid is still), while the pipe is uninsulated and exposed to the harsh Canadian winter conditions.

There are multiple heat transfer mechanisms involved in the estimation of heat losses from a pipe:

A schematic of this process is shown in Figure 1. 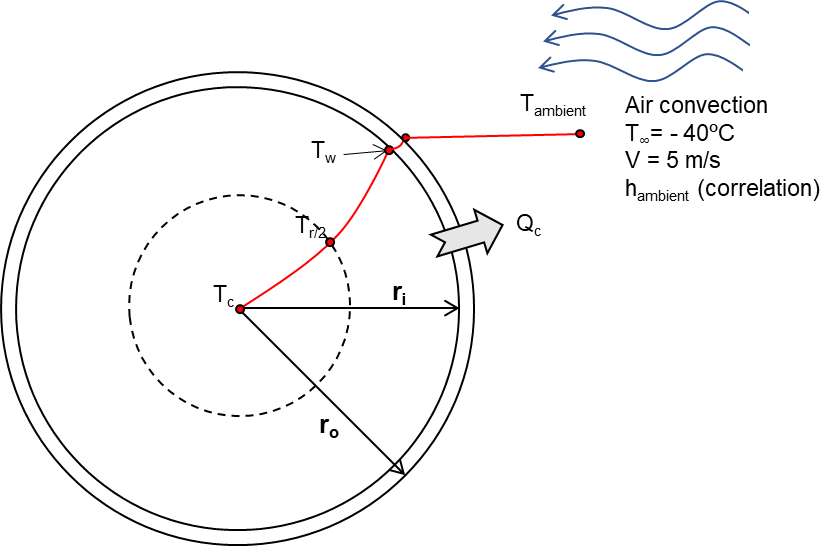 A first principles model can be applied to solve this problem as follows,

This differential equation represents the time-evolution of temperature at different radial positions. This two-dimensional model assumes a semi-infinite length pipeline with a still fluid in the pipe. The initial condition assumes a constant fluid temperature (Ti at t = 0 that is higher than the ambient temperature), as follows,

At the pipe center, the maximum temperature boundary condition can be written as,

The second boundary condition at the pipe internal wall is as follows,

Eq. 3 depends on the thermal conductivity of the oil and the pipe (stainless steel), the pipe geometry, and the ambient conditions. The first term in the denominator represents the thermal resistance due to pure conduction in the pipe wall, and the second term is the resistance provided by the external air circulating around the pipe. An appropriate correlation to determine the forced convection coefficient of air can be used to determine hambient (it depends on the physical properties air, air velocity, and pipe geometry).

This model neglects the effect of the internal natural convection (no internal fluid mixing due to gradients temperature. This is a reasonable assumption for high viscosity heavy oil (with viscosity > 100 cP at ambient conditions and small diameter of the pipe). While this type of model may not seem to be practical at first glance, it can be programmed in matter of minutes in any modern PDE solver (such as MATLAB, Octave, or R) using just a few lines of code.

A heavy oil (about 1,100 cP at 20ºC) is flowing in a 6” (uninsulated) pipeline at 50ºC. A sudden disruption of the operation leaves the oil immobilized, with the pipeline exposed to winter conditions (-40ºC, wind at 3 m/s). A critical question in this case is How long does the operator have to restart the operation without incurring in major flow assurance issue?

In other words, an accurate estimate of the heat losses is required, and specific information about the cooling profile of the felid in the pipe is necessary. If the viscosity of the oil falls below a given threshold (let us say 1,000 cP) as the oil cools down, the operator may be in trouble restarting the system.

As shown in Figure 2, the fluid temperature drops to 20ºC in 2 hours and to 0ºC in 3.8 hours. The cooling profile flows a similar trend for different initial temperatures (60ºC and 80ºC). It is clear that the temperature at the internal pipe wall falls much more rapidly, as shown in Figure 3 (as low as -20ºC in 5 minutes). But how does this may affect the oil flow? Looking at Figure 4, the viscosity increases to 1,000 cP in slightly over 1.7 hours.  According to this criteria (or other depending the on the design of the facility), this is the maximum time that the operator has to restart the flow safely. In some cases, this time may be not be enough the fix the cause of the disruption. If so, is it worth to install insulation in the pipe? 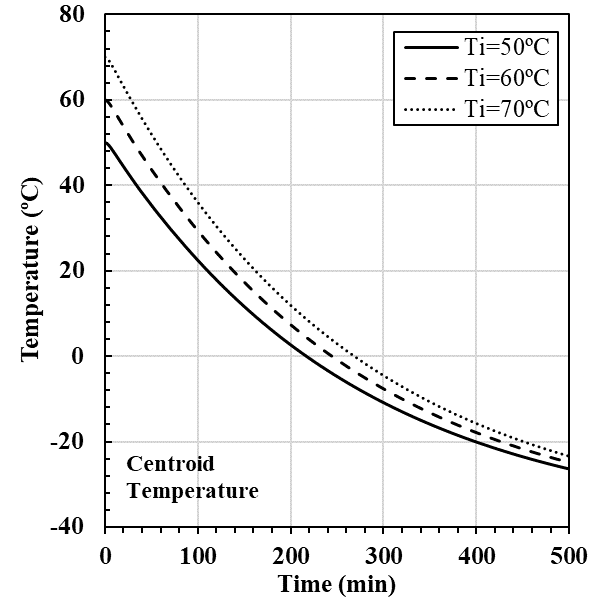 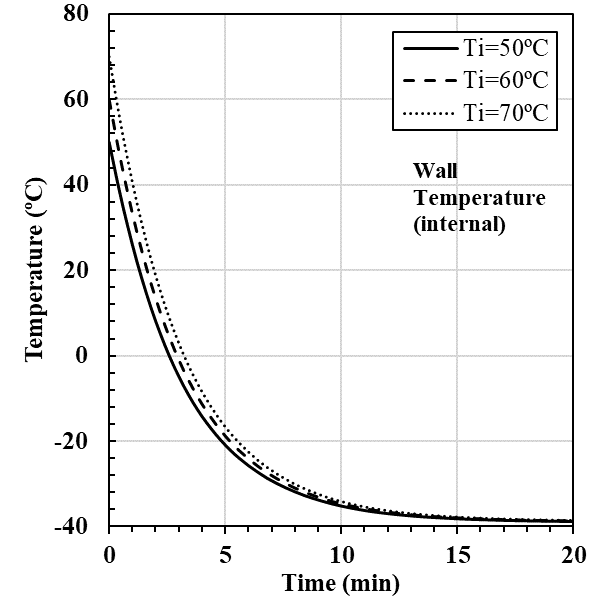 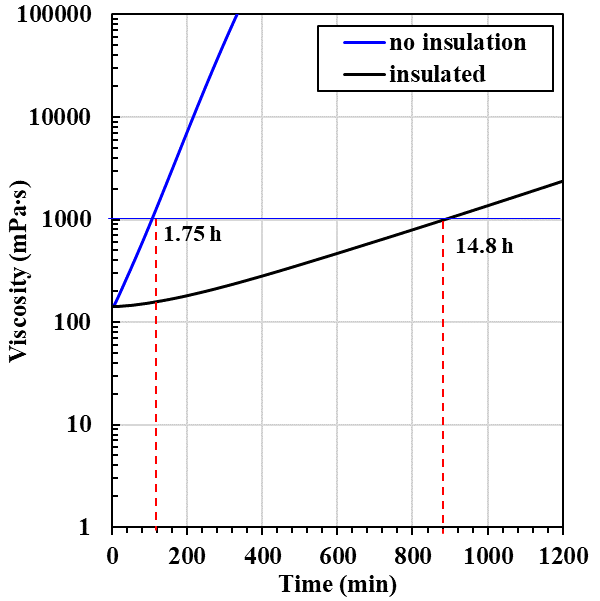 Figure 4. Viscosity increment as a result of pipe cooling.

Because this approach relies on physical principles, the thermal resistance provided by the insulation layer can be included in the wall-side boundary condition (eq. 3) as follows,

A third term has been added to the denominator of equation 4, representing the thermal resistance of the insulator with a thermal conductivity ki, and thickness It. If the engineering team decides to install a fiberglass insulation of 38 mm thickness, the benefits are observed immediately (Figure 5). With the insulation in place, the oil temperature does not drop below 30ºC in the first 8 hours. Moreover, the viscosity is not expected to fall below 1,000 cP in over 14 hours of disruption (Figure 4). The installation of the insulator abated heat losses by about 9 times, so the engineering team can take the decision to install insulation if major disruption of the operation is expected. If this alternative is not adopted, at least the operations team has a good idea on how much the disruption can last without creating issues. 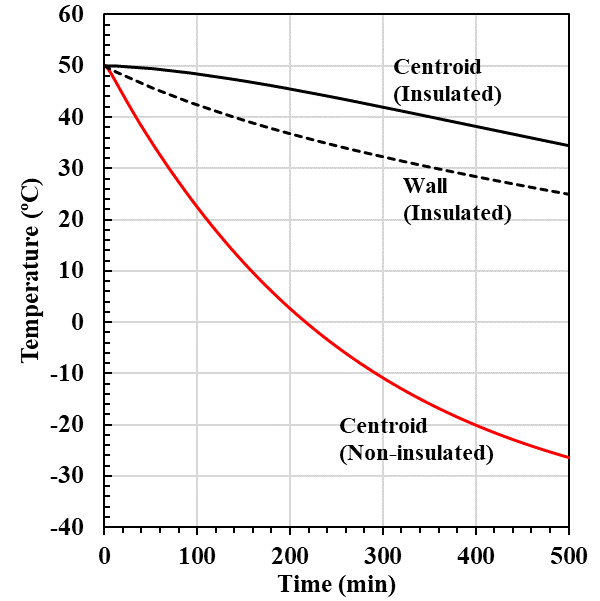 This kind of analysis can be extended to multiple problems in the industry with little modification on the base code. Moreover, different fluids, materials, and ambient conditions can be evaluated almost instantaneously taking advantage of modern computation times or even using remote engines with solutions stored in the cloud. 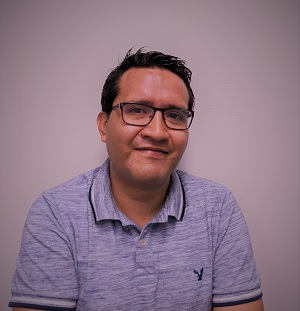 Jairo joined Process Ecology in February 2020 as a R&D Engineer. He started his career in 2012 as a Scheduling and Optimization Project Engineer with IST International in his native Colombia, where he was involved in the development of supply chain models for the oil industry. Jairo has a PhD degree in Chemical Engineering from the University of Calgary and a Master’s degree in Chemical Engineering from Universidad Nacional de Colombia. During his PhD and Postdoctoral fellowship he focused his research on energy sustainability and low energy intensity heavy oil extraction and upgrading. During his time in Colombia, he investigated novel methods to recover and transform different by-products from the ethanol industry. His interests range from process intensification and plant-wide optimization to environmentally responsible processes. Jairo enjoys his spare time learning about history, astronomy, and Spanish/Latin American cooking, however he is also very avid soccer player and novice hiker.